Meet the Missouri Coalition to End Domestic and Sexual Violence 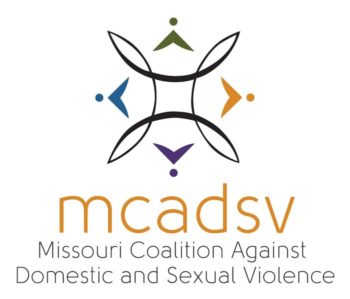 What is it like to do domestic violence work in Missouri?

Missouri is the “Show-Me” State, and the Missouri Coalition Against Domestic and Sexual Violence (MCADSV) approaches our work with that motto, which means we aren’t shy about our pragmatic, stalwart character. We acknowledge there are different perceptions and values across the state. We also know that Missouri communities are diverse and unique — what works in one community might not work in another, yet we’re all united with the shared value that rape and abuse must end.

What impact does your unique Missouri context have on this work?

MCADSV has a large membership of 120 local domestic and sexual violence programs, with roughly 22,000 advocates in a variety of roles across Missouri. When we participate in NNEDV’s annual Domestic Violence Counts Census, and consistently get a near 100 percent participation rate, it’s a big deal. Missouri domestic and sexual violence programs know that data collection is central to our work.

What are the biggest barriers that survivors face in Missouri?

Consistently we know that survivors face a lack of housing and transportation options. These issues span across rural, suburban, and urban areas of the state. Advocates are industrious and work to provide survivors with as many options as possible, yet we know there aren’t enough of these resources available.

What’s happening in Missouri that you’re excited about? Proud of?

We’re incredibly proud of our Shelter Rules project, a statewide effort that began in 2007 to work with domestic violence programs on reducing rules in shelter programs and incorporate a harm reduction model. The goal was to find a better way to welcome domestic violence victims — many of whom had every aspect of life controlled by their partners — into shelter where they could experience autonomy despite the constraints of a communal living environment. Our publication, How the Earth Didn’t Fly Into The Sun, has been internationally recognized from Canada to South Africa.

Are there any champions in Missouri that you’d like to thank or celebrate for their record or work on domestic violence?

Our CEO, Colleen Coble, is our biggest champion. For more than 30 years, she has been an advocate for women and their children and an educator on approaches to violence intervention in communities. She has been a public policy advocate since 1989, and has guided the passage of significant legislation that benefits victims of domestic and sexual violence. Colleen is also a founding member of NNEDV.

We have a mission to unite Missourians with a shared value that rape and abuse must end, and we advance this through education, alliance, research, and public policy. In 2017 we trained 2,166 advocates through statewide, on-site, and regional trainings; we trained more than 500 individuals on our prevention initiatives. Also, in 2017 our unrelenting advocacy untangled decades of bureaucratic red tape and gained the release of more than $77 million in funding for domestic and sexual violence services. And with that money, we also gained living wages for a primarily female workforce of advocates at Missouri domestic and sexual violence programs.

In 2016 MCADSV celebrated our 10-year anniversary of expanding our mission to become a dual coalition, and in two years we’ll celebrate our 40-year anniversary. Since our beginning, MCADSV has worked to ensure advocates and allied professionals have the tools and resources they need to change lives. We foster a sense of pride in being part of something significant and constructive. MCADSV continues to unite Missourians to be a part of positive social change, with the knowledge that no one has to confront, manage, or cope with violence alone.