Funding to end violence against women is in jeopardy. Today, The Hill reported that the Trump team is considering cutting federal spending, including gutting all funding for the Violence Against Women Act (VAWA).

Take Action Now: Urge your Members of Congress to stand up for victims of violence and say no to eliminating VAWA funding.

VAWA was passed with bipartisan support to improve the law enforcement response to violence against women and create specialized victim services. VAWA has been incredibly effective in saving lives and money.

“Cutting VAWA is completely unacceptable, dangerous, and would threaten the lives of millions nationwide,” said Kim Gandy, NNEDV President and CEO. “There are victims of domestic violence in every community, every workplace, every church. We must all stand up and be counted in support of the Violence Against Women Act, and the continuing need for this vital funding.”

Please join us in sending this important message to Congress. 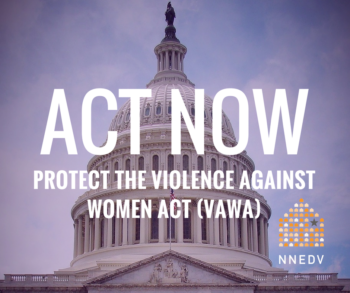 Victims of domestic violence, sexual assault, stalking, and dating violence rely on federally-funded direct services such as shelter, rape crisis services, legal assistance, direct counseling, and more. Yet, on just one day in September, more than 12,000 requests for domestic violence services went unmet due to lack of funding and resources. An average of three women are murdered every day due to domestic violence. Cuts to these programs endanger survivors’ lives. VAWA has made significant progress helping victims achieve justice and safety, but there is still much work to be done. Our nation’s improvements to the community-based response to these degrading and life-threatening crimes are made possible by federal funding.

“We refuse to allow this progress to be threatened,” said Gandy. “We urge you to act now to protect VAWA funding from these and any other proposed cuts.”