Today, the National Network to End Domestic Violence (NNEDV) honors the International Day for the Elimination of Racial Discrimination. We recognize this opportunity to both examine the current structures of oppression that lead to intensified violence and determine a path to ending racism and gender-based violence.

As an Asian American woman, all too often, I see Asian women being sidelined in conversations surrounding issues that affect women of color. While there are segments of Asian communities that enjoy privileges that other communities of color are not afforded, the current structures of power and privilege negatively and dangerously impact the experiences of Asian women in unique ways. The bodies of Asian women are exoticized and hypersexualized, and the perceived submissiveness of some Asian cultures is glamourized and erotized. This fetishization reduces Asian women to an inaccurate and detrimental stereotype, and creates staggering rates of violence. These alarming rates of violence clearly demonstrate the need to acknowledge and halt the racial discrimination behind it. 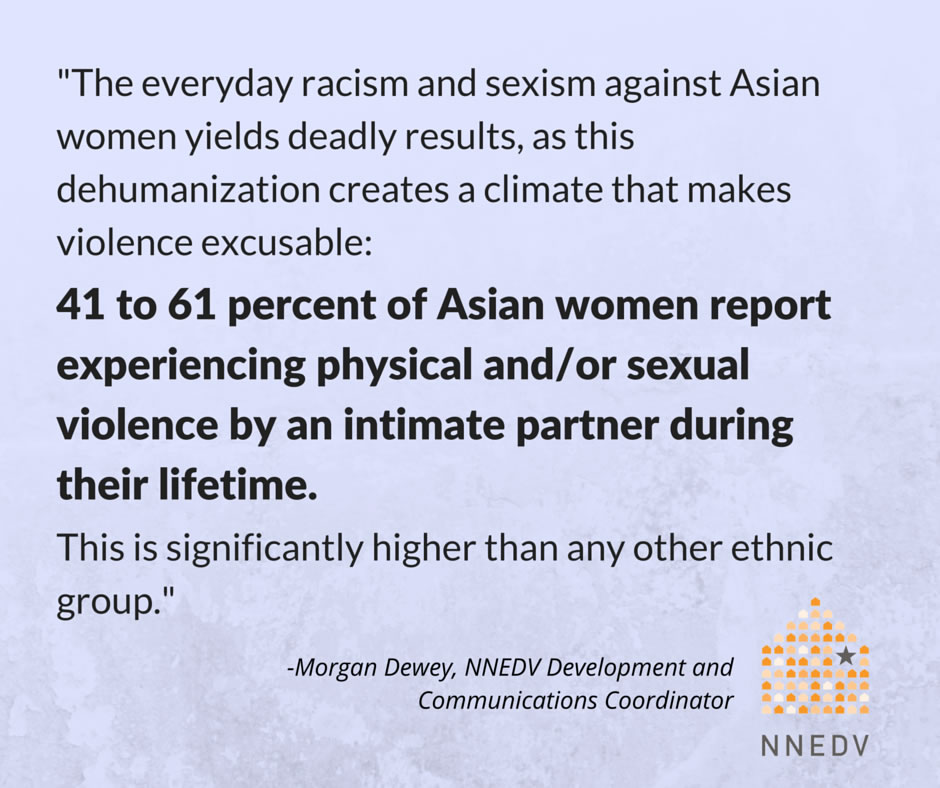 While this discrimination is overt, there are very few conversations that address these issues affecting Asian communities. Pop culture is inundated with sexualized stereotypes about Asian women every day. On the most recent season of the reality television show, The Bachelor, the bachelor himself refers to one of the Asian American women on the show as a “tigress” and “sex panther,” immediately after he praises her “innocence.” [1] This trope plays into the view that Asian women are both submissive and hypersexual. Even comedian Amy Schumer, who has been called “the feminist the world needs right now,” [2] performed a bit about how she simply “can’t compete” with Asian women, joking about how they laugh with their hands over their mouths because “they know men hate when women speak,” or referencing why they are more sexually pleasing to men. [3] Despite her comedic flair, it is clear that these harmful stereotypes permeate even sex-positive, feminist spaces.

Far from harmless, this hypersexualized narrative leads to sexual objectification and violence. The everyday racism and sexism against Asian women yields deadly results, as this dehumanization creates a climate that makes violence excusable: 41 to 61 percent of Asian women report experiencing physical and/or sexual violence by an intimate partner during their lifetime. [4] This is significantly higher than any other ethnic group. [5]

In addition, according to the “(Un) heard Voices” report from The Family Violence Prevention Fund, Asian survivors may be less likely to reach out for help due to various and unique institutional, cultural, and individual barriers. “(Un) heard Voices” also explores the idea that power expressed abusively against Asian women is part of the cultural milieu, and therefore abusers are not held accountable for their behavior. [6]

The racism and sexism that feed these alarming stereotypes provide a clear link to the rate of violence against Asian women. To combat this, we must stop dehumanizing individuals and entire communities. The continuation of these conversations on the International Day for the Elimination of Racial Discrimination and beyond is crucial to ending the racial discrimination that leads to devastating violence.