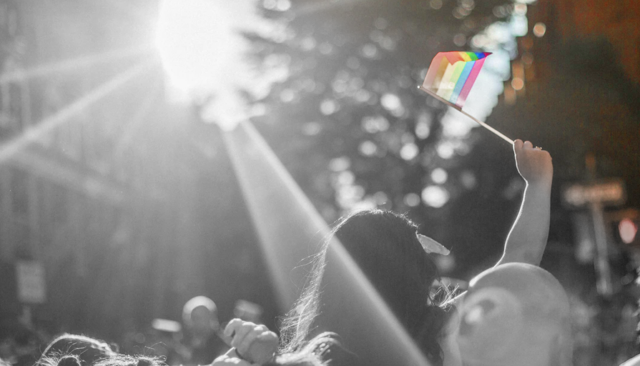 The National Network to End Domestic Violence (NNEDV) joins the LGBTQ+ community to celebrate Pride Month. Recognized each June, this month honors the anniversary of the 1969 uprising at the Stonewall Inn—often considered a tipping point in the LGBTQ+ rights movement as patrons fought back against systemic homophobia and police brutality—and now encompasses all kinds of events and celebrations across the country and around the world.

Pride Month also includes remembrance of LGBTQ+ community members who have been hurt and killed due to discrimination and violence. Everyone deserves to live safely and freely, regardless of their gender or sexuality, but members of the LGBTQ+ community (including LGBTQ+ survivors of domestic violence) often face structural and systemic barriers that prevent them from accessing support and living without fear.

According to the National Intimate Partner and Sexual Violence Survey (NISVS), 61.1% of bisexual women, 43.8% of lesbian women, 37.3% of bisexual men, and 26% of gay men have reported experiencing rape, physical violence, and/or stalking from a partner during their lifetime—compared to 35% of heterosexual women and 29% of heterosexual men. The U.S. Transgender Survey found that 54% of respondents have experienced some form of violence from a partner, and 24% have experienced severe violence. Abusive partners often take advantage of deep-seated discrimination and societal bias to discredit LGBTQ+ survivors and keep them from accessing resources and support. For LGBTQ+ survivors living at the intersections of various marginalized identities, abusers often weaponize the barriers they face as a tool to gain further power and control over them. LGBTQ+ survivors with disabilities, who are people of color, who are immigrants, or who face other kinds of discrimination and harm based on their identities can face greater, and more substantial, obstacles to accessing help and support.

NNEDV works at several levels to help protect the rights of the LGBTQ+ community, including LGBTQ+ survivors. In 2013, the Violence Against Women Act (VAWA) became the first federal law to include nondiscrimination provisions on the basis of sexual orientation and gender identity. VAWA’s latest reauthorization in March 2022 bolstered access for survivors of all genders by strengthening these non-discrimination laws and creating an LGBTQ+ services program. We also support the Equality Act, a landmark piece of legislation that, if enacted, would expand federal civil rights laws to protect LGBTQ+ people from discrimination in employment, housing, credit, public spaces, and federally funded programs, including health and education.

We also work to raise awareness about the work local domestic violence programs and advocates, are doing to help LGBTQ+ survivors and provide them with inclusive, appropriate resources and services. As part of the National Task Force to End Sexual and Domestic Violence, we have opposed earlier attempts by the US Department of Housing and Urban Development (HUD) to roll back nondiscrimination protections. We (along with the Biden-Harris Administration) support HUD’s current Equal Access Rule, which requires equal access to HUD housing programs without regard to a person’s actual or perceived sexual orientation, gender identity, or marital status, to ensure that housing policy is inclusive for all in shelters and housing programs.

Our 16th Annual Domestic Violence Counts Report found that 86% of participating programs across the country provide support and advocacy for LGBTQ+ victims throughout the year. Unfortunately, several dozen programs also reported they had to reduce or eliminate these services due to funding cuts or the impacts of the pandemic, putting help out of reach for survivors in need. We continue to urge increased funding for local programs through the Family Violence Prevention and Services Act (FVPSA), the Victims of Crime Act (VOCA), and the appropriations process. When LGBTQ+ domestic violence survivors are believed and supported—and when the programs serving them have the necessary resources and staff to provide this support—it can make a world of difference. NNEDV reaffirms our solidarity with LGBTQ+ survivors and their communities as we continue to celebrate pride and work toward a future where every home is a safe home.

We encourage everyone to learn more, follow, and support some of our partner organizations this month and year-round: FORGE, Lambda Legal, the Los Angeles LGBT Center, the National Center for Transgender Equality, and The Network/La Red. For more information about domestic violence against LGBTQ+ survivors, visit WomensLaw.org.