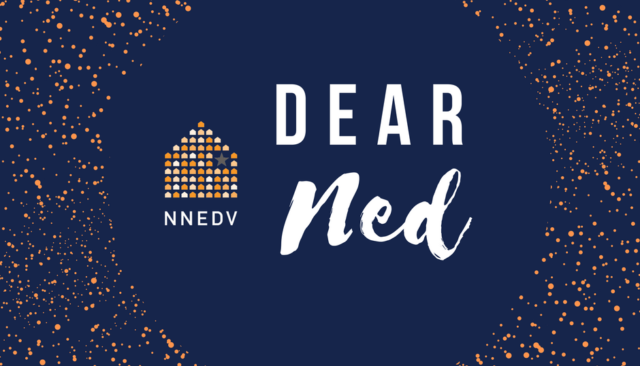 Ask an Advocate: How Can I Make Her Leave?

Through our Ask an Advocate series, we’re answering common questions about domestic violence that survivors and their family members may have. Read them all here.

My sister is in a relationship with a terrible guy. He’s clearly abusive. He yells at her, calls her names, and rages over stupid things like the gas tank being at the ¼ mark. He throws things when he’s raging, and although she said he’s never hit her, I don’t think I believe her. I’m worried about her, but I’m also very frustrated with her. She keeps saying that she’ll leave him, but she never does. The one time she did, she went back after only seven hours apart. Sometimes, I get so mad at her. She’s incredibly dependent on him, and I’m scared that one day he’ll hurt her. How can I get her to leave him for good?

My Sister Needs to Break Up With Her Abuser Dear My Sister Needs to Break Up With Her Abuser,

It is definitely difficult when you are afraid for someone you love, and it can feel really frustrating when they make decisions that you feel will put them in more danger. However, while it is difficult to watch someone you love struggle and be abused, I encourage you to continue to support her. It can be terribly difficult to actually leave an abusive person and there could be many things happening that you’re not aware of. Individuals who are abusive often use tactics like emotional manipulation, isolation, financial abuse, and other strategies that make it incredibly difficult for a victim to “just leave.” It can also be hard and confusing to separate a partner’s abusive actions from the person who loves you when he or she is not being abusive. Your sister may very well want the abuse to stop, but she also wants to believe him when he says he will change. Or, he may be someone who doesn’t say that he will change, but instead threatens her with greater harm (to her, others, or himself) if she were to leave. Fear is common and real – the most dangerous time for women and children is when the woman leaves or attempts to leave the abusive partner.

What you can do for your sister is be someone she can talk to and rely on whenever she’s ready to talk or move on. Yes, it’s frustrating because leaving seems like an easy answer and you’re worried for her, but be careful: you don’t want your frustrations to alienate her to the point where your sister feels like she has no one other than her abusive partner. If and when she is open to it, encourage her to talk to a domestic violence advocate – either at the local domestic violence program in your area or through the National Domestic Violence Hotline (1-800-799-7233). Advocates are trained to understand the dynamics of domestic violence and can help your sister work through her options and choices. Remember – the choices are hers to make and she may have reasons for not being ready to leave yet. Be open to hearing them and allowing her space to figure out a plan. Since stalking and risk of assault can increase after someone leaves an abusive partner, it’s important for her to feel comfortable and prepared for the decision to leave.

When you talk to your sister, focus on the abusive behavior and reiterate how the behavior is not acceptable. She may feel love and connection with the abuser so try not to criticize him (even though you may want to!) because she may get defensive. For example, tell her that it’s unreasonable for someone to go into a flying rage when the gas tank is ¼ full. You can be honest with her about your feelings and fears for her and what he might do, but leave it at that. Don’t tell her what she “needs” to do (resist the urge). Taking away her freedom to make choices for herself might be the same dynamic that is happening with her abuser. Your sister needs to know that she is empowered to make decisions about her own life, and that you believe and support her. That’s the best thing that you can do.

Your sister is lucky to have someone who cares for her as much as you clearly do.

Read more in our Ask an Advocate series.