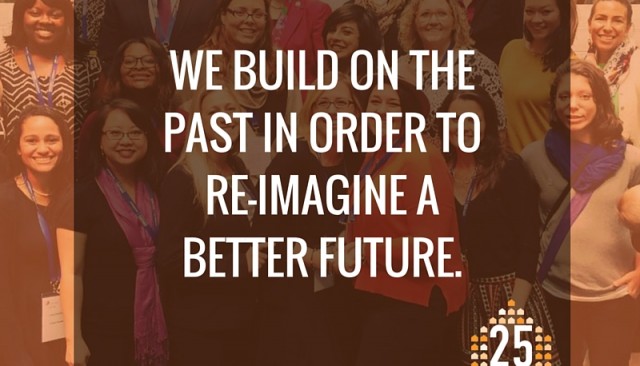 Over the past 25 years, the National Network to End Domestic Violence (NNEDV) has helped ensure that millions of survivors find the assistance and support they need. We have helped shape the way the United States responds to domestic violence, and work to make domestic violence a national priority for policymakers, high profile businesses, and the general public.

On this 25th day of December, we’re kicking off a special 25th anniversary campaign: 25 Ways that NNEDV Makes a Difference. Now through February, we’ll be sharing on our social media channels (Facebook, Google+, Instagram, and Twitter) 25 ways that our work impacts survivors and communities across the nation. Follow along with hashtag #NNEDV25. (Or just keep reading to see all 25 Ways now…)

As we look ahead, we recognize the monumental achievements of our founders and allies that paved the way for the work we do today. Building on this past, we are re-imagining a better future. This and every day, we thank our members, local programs, supporters, donors and funders, and allies for standing with NNEDV.

25 Ways that NNEDV Makes a Difference

1. We are a leading national voice against violence. Victims need a voice in Congress. Our advocacy helps keep “ending domestic violence” on the national agenda. 2. We are part of a global movement to end violence against women. NNEDV is one of the founding members of the Global Network of Women’s Shelters (GNWS), connecting shelters & networks from all over the world to increase capacity and amplify advocacy through a global, unified voice. 3. We stand up for ALL survivors in the fight to end violence. We worked to pass the first-ever Violence Against Women Act (VAWA) along with then-Senator Joe Biden, and continue to expand and improve the protections therein. The renewal of VAWA in 2013 reauthorized and improved lifesaving services for ALL victims of domestic violence, sexual assault, dating violence, and stalking – including Native women, immigrants, LGBT victims, college students and youth, and public housing residents. 6. We’ve led the charge in combating financial abuse. NNEDV has been an essential voice in raising the issue of economic security and its importance in the safety and lives of survivors in the realms of public policy, private industry, and communities across the country. 7. We coined the phrase “technology safety.” Before Safety Net, there wasn’t a phrase to describe the unique technology challenges and barriers facing survivors, or to encompass the ways that technology can be used to increase safety AND the ways that abusers can misuse technology to abuse, harass, stalk, or harm victims. 9. We help create safer communities. We united the gun violence prevention and domestic violence movements to promote survivor and community safety through supporting common-sense gun legislation that protects victims of domestic violence and keeps firearms out of offenders’ hands. 11. We help build international capacity to end violence against women. In 2012, NNEDV hosted the 2nd World Conference of Women’s Shelters in Washington, DC bringing together nearly 1,500 delegates from 84 countries and featuring such voices as Former President Bill Clinton, actress Reese Witherspoon, and Crown Princess Mary of Denmark. In 2015, NNEDV presented and participated at the 3rd World Conference of Women’s Shelters held in The Hague, Netherlands, which brought together nearly 1,000 delegates from around the world. 12. We train advocates on economic justice & financial empowerment. In the past 25 years, NNEDV has reached over 600,000 survivors through financial education and economic empowerment activities, including such topics as budgeting, match savings, and credit repair. We help survivors move from short-term safety to long-term security. 13. We help victim services effectively respond to victims experiencing technology abuse. Our Safety Net Project has trained over 77,000 people on technology safety at more than 1,000 trainings across the United States and around the world. We provide cutting edge training, information, resources, and strategies around technology safety for survivors, agencies, law enforcement, and other service providers. 18. We count. Responding to the need for data on domestic violence programs and victims served, NNEDV started the #DVcounts Census. The Census gathers and reports lifesaving services and the unmet need in the field. It has been mentioned by countless legislators, organizations, & media outlets to highlight the need for increased services for victims. 19. We fight for victims of crime. NNEDV was instrumental in securing increased funding for the Victims of Crime Act (VOCA) Fund, bringing the funding to an unprecedented level and helping to meet a desperate need in the field. 21. We defend and support housing protections for survivors. NNEDV shepherded landmark housing protections in the Violence Against Women Act (VAWA), which prohibits discrimination against victims of domestic violence in federally subsidized housing. These protections help survivors maintain safety, increase their ability to call upon law enforcement, and ensures that they do not become homeless based on the action of their perpetrators. 22. We promote survivor self-determination. Most publicly funded housing programs require residents to take part in specific programs; however, we train OVW-funded Transitional Housing programs to provide voluntary services, because survivors don’t need to be controlled or forced to do anything. 23. We make space for social change. We are dedicated to creating a social, political, and economic environment in which violence against women no longer exists. We work every day re-imagine the future and make this vision a reality. 25. We believe safety is a human right. We believe that every person has the right to a life free from violence, a safe home, and a hopeful future. We build on the past in order to re-imagine a better future. We hope that one day there no longer needs to be a National Network to End Domestic Violence because the world no longer tolerates violence against women. Until that time, we hope you’ll stand with us against domestic violence – our steadfast supporters and innovative partnerships make our work possible.

Thank you for supporting peace, safety, and NNEDV!