In the domestic violence field, “self-care” refers to the intentional practice of taking care of one’s mental, physical, and psychological well-being as it relates to trauma. Practicing self-care is a necessity for individuals who have survived trauma and for those who are experiencing vicarious trauma through their work.

Self-care looks different for everyone. There is no one way to practice it; however, listening to music is one of the most common activities across all ages. [1] With input from the 56 state and territory domestic violence coalitions, the National Network to End Domestic Violence (NNEDV) created an #EmpowermentPlaylist to shine light on the songs that inspire us to create change, and offer strength to those who continue to fight to end domestic violence. With artists such as Gloria Gaynor, Beyoncé, Lady Gaga, Nina Simone, John Legend, and Sara Bareilles, just to name a few, our #EmpowermentPlaylist can be a powerful tool for social change, healing, and creative expression. 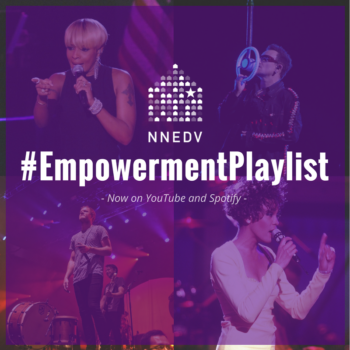 Millions watched as Lady Gaga performed “Til It Happens to You,” surrounded by survivors of sexual assault at the 88th Academy Awards. Likewise, millions watched as Beyoncé performed “Formation” at the 50th Super Bowl just one day after she released the music video, which celebrated Black women and expressed a clear message against police brutality. Artists and musicians can use their talent to reflect current issues and be a voice for social change. The late singer/activist Nina Simone explained it well: “You can’t help it. An artist’s duty, as far as I’m concerned, is to reflect the times.”

Research has shown that music can have profound effects on our emotions, memory, brain health, and attention. [2] One study states that music can be used to increase self-awareness, social relatedness, and mood regulation by helping the listener convey feelings, temporarily forget about reality, cope with worries, and add more meaning to life. [1] Additionally, music can be used as a connector, providing people with a sense of community to a particular social group. Music can encourage us to feel closer to others, express an identity, and collect information about social environments. [1] Music can be a catalyst for inspiration or mood regulation. Last, music can have physiological and psychological effects, causing listeners to feel relaxed, alert, or even cope with depression. [1, 3]

NNEDV’s #EmpowermentPlaylist is a compilation of anthems from advocates across the United States. Our growing list is a musical reflection of the people who work every day to achieve safety for all survivors. These are the songs that help us work with survivors to safely address the many intersectional issues they face, from economic justice to housing to technology safety and more. Our hope is that these anthems will encourage everyone to express, heal, and empower themselves. This #EmpowermentPlaylist is for those who feel – or need to feel – brave, flawless, and like a queen or a boss, and to encourage everyone around us to feel the same.